Fail to Yield to Traffic on Through Highway

When entering an intersection or roadway the driver must yield the way to traffic lawfully using the roadway.

Definition of Fail to Yield 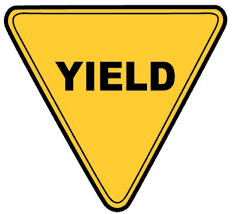 Under the Highway Traffic Act of Ontario there are two instances where the driver is required to yield to traffic:

A driver is required to yield to traffic lawfully in the intersection as to avoid an unintentional accident occurring.  Traffic in this section includes pedestrians.

Every driver entering a roadway from a private road or driveway shall yield the right of way to all traffic approaching on the highway/roadway so closely that to enter would constitute an immediate hazard.

The main difference between the two is that section 139 is coming from a private drive or roadway and section 136 must be at a stop sign.

Penalty for Failing to Yield

A conviction to a charge of fail to yield goes on the insurance for three (3) years and has the following penalties:

Where an accident has occurred a conviction for this offence will result in two (2) strikes against the insurance, (1) one for the accident and (2) one for the ticket. Two incidents on an insurance policy will cause the insurance to increase for three (3) years or more.

Fight Your Fail to Yield Ticket Today
Contact Us

Where a charge is a result of an accident.  The court takes the matter seriously as there will be property damage and possibly injured parties.

Traffic Ticket trials for accidents usually require that a civilian witness and a police officer testify at court.

The evidence at trial will need to examine the technicalities of the charge and the Who, What, When, Where, and How.  The driver or defendant may or may not be required to give evidence and only if the evidence will help the case.

Many times self represented accused appear themselves in court and testify, thereby assisting the prosecution in proving the charge by providing the “who” or in legal terms, the “identity evidence” . The court asks who was the driver and the witness or police officer can point to the defendant sitting in the court, thereby proving the who or identity evidence.

Traffic ticket trials, like any court case, requires the cross-examination of police officers and witnesses, as well as any legal arguments that maybe presented in your defence.

Many times in investigating and defending fail to yield charges we find that the officer has issued the wrong charge for the situation, e.g. issued the charge under section 136 where section 139 was the proper section, subsequently cases have been dismissed.

Many times a fail to yield ticket will be the result of a police officer observing the driving.  The officer may issue a traffic ticket where they believe the driver has failed to yield the “right of way” to either traffic or pedestrians.

The trial will involve cross-examination of the officer, legal arguments and possibly having the driver testify in their own defence.

Send us an Email