Suspensions for Accumulation of Demerit Points

The accumulation of demerit points will lead to a licence suspension depending upon the class of licence. 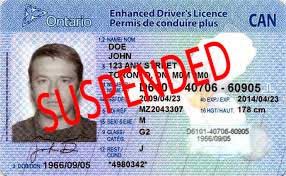 Class G1 and G2 licence holder are subject to a demerit points suspensions for:

Upon accumulating nine (9) demerit points the driver will receive a notice from the Ministry of Transport.

The Ministry will require them to attend at their offices to explain why they have received the demerit points and why the driver should not have their drivers licence suspended.

Suspensions for demerit points take affect from the date that the licence was received, or handed into the Ministry of Transportation.

If you are caught driving under suspension as of demerit point accumulations, the police can charge you even if you did not receive notice of the suspension.

If the driver is charged with drive under suspension as a result of demerit points the penalties are;

Where the driver has accumulated demerit points on their licence there are only two (2) ways for the demerit to be removed:

When the driver has been convicted of an offence there maybe a possibility to appeal the conviction.  An appeal would either fight the charge with the goal of having the charge dismissed or reducing the charge to save the demerits.

There are rules for Appeals and we suggest you contact our office(s) to discuss your case.

Demerit points appear on a driving record only upon conviction.  Demerits stay on the abstract for two (2) years from the offence date.

Through creative management of your traffic ticket many times time can be used to ensure that the licence does not go under suspension.

John has 6 demerits on his licence.  He now receives a speeding ticket with 3 points.   The further 3 points if he were to pay the ticket will put him at 9 points and result in a 30 day licence suspension.

John contacts OTT and discusses his problem.  OTT reviews the case and explains to John how they will work to control the court date so that the first ticket and points age out and are expired by the time the third ticket comes to court.  Thereby avoiding a demerit point suspension.

Send Us an Email

OTT Legal Services are committed to protecting the confidentiality of personal information from driving while suspended consultations in Toronto and throughout Ontario that are requested through electronic communications as specified in our Ontario Traffic Ticket Privacy Policy. We do not share or give out any personal information to any persons or agencies. Perspective and current clients with driving while suspended tickets should understand and appreciate the risks associated with the transmitting of personal and or confidential information electronically and the potential for illicit interception.